I don’t know whoever said that and I know it’s a popular sentiment.

I don’t agree with this and I never have.  When I got down to my goal in 2007 I was pretty happy (same size and weight I am now).  Then in 2010 I decided to lose a few more vanity pounds.  I didn’t want to be too skinny, I just wanted to get rid of a few trouble areas.

Summer of 2010 is when the health issues started to set in.

This is a bad angle, because I am semi-sideways and look smaller than I am, but I am WAY too thin.  This is September 2010 in Florida.

I was flipping through photos after work meetings the other day and a coworker saw this one and lectured me.  I was really happy at that weight and at the time, I thought that was the ideal.  Shit, look at me.  I am smaller than Dan’s mother, who is TINY.

My body earlier this year, adjusted itself back to my original goal weight and not in the same distribution.  I was MAD.  But that’s where my body apparently is most happy.  My health has picked up in areas that weren’t working so well.  If I have to pack a few extra pounds to have normal bodily functions, then so be it.

Sprouts had peppers on sale on Sunday, so I decided it was time for stuffed peppers!  Just a little something I threw together as I was making it.

First, I made my own chorizo.  Savory Spice shop chorizo seasoning.  You add it to whatever type of ground meat you want, add vinegar (I use apple cider) and water and mix, then chill for a few hours or longer.  The directions are on the side of the package.  I like this seasoning so much, I have a big bottle of it.

-1 lb of chorizo-cooked (whatever kind you like, they make vegetarian versions too)

Pull the tops off of the bell peppers and remove the seeds.  You can either cut up the tops (minus the stem) and throw in the mixture, or toss them in trash.  Put the 4 bell pepper bottoms in a pot of boiling water and boil 4-5 minutes.   Remove from the water and dry them off.

In a skillet combine the mixed veggies, rice, and meat/meat sub and heat until warm.  Then stuff each pepper with the mixture.

Place in a greased 8×8 pan and bake covered with foil, for 20 minutes.  Remove foil, top with cheese if desired and broil until melted and bubbly.

Dan LOVED these.  Good.  Because we are having them as leftovers tonight.  It’s LUNA run night and we always have leftovers on Tuesdays, because I don’t have time to cook.  I am already doing well not to gnaw my arm off before I get home at 8 pm.

I realized while I was in San Francisco last week, that I am more like my mom that I thought.  This is a good and a bad thing.

The bad I am really going to have to try hard to fix for my sanity and for my health.  It’s not hard to see that some of my habits are very type A and type A’s have been shown to have increased risk for stress issues.

The breakfast challenge continues, although I failed today.  Not everything I pack always holds me until lunch.  I ended up eating my afternoon snack as a breakfast snack.

Most workdays I eat the same thing, I usually make 3-4 of the same thing, so I don’t have to keep making something every night or the next morning.  Here’s a sampling of what I’ve had lately….

Egg and turkey scramble.  Really should have added some healthy fats, because this didn’t go that far this morning 😦 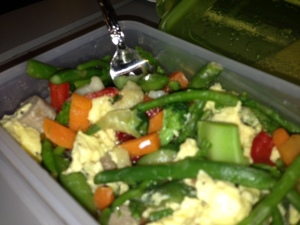 I’m a big breakfast eater and because I usually wake up so early, there are sometimes 2 breakfasts 🙂  Oddly enough, breakfast is my LEAST favorite meal to eat out (I think mostly due to the traditional breakfast foods I don’t eat taking up majority of menu choices)

Monday marked the 6 year anniversary of when I joined Weight Watchers. 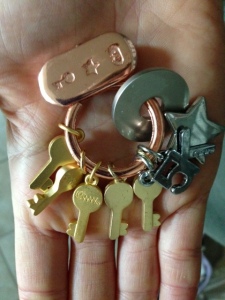 My keychain with 5 lifetime keys, 25 lb disc, 5K charm, and goal star.  Not sure why I don’t have a 16 week award.  This isn’t my original 10% keychain, that one was destroyed YEARS ago.  Now this just sits on my spice rack.

The last year hasn’t been easy with my health issues, but i’m hoping for many more years to celebrate my success!

Ok, my family has been making venison sausage since the beginning of time.  I hadn’t played along in a while, since I don’t live at home.  Ok, a while has been since high school, which was a LONG time ago.

I jumped back into the tradition over Christmas, but with a twist.  I made the traditional with my parents plus hot breakfast, breakfast, sweet Italian and hot Italian.  I had bought a variety pack from Bass Pro called Backwoods by LEM.  I liked the seasoning blends and their flavor (and the fact they are gluten free), but the breakfast blends had MSG, which I try to avoid.  Next time i’ll be hitting up Savory Spice shop and buying my own quality spices and making my own spice blends.

We cheated and used the grinder to help stuff the casings.  My mom likes to hand crank, but that takes quite a bit of time.  We only made links from the traditional sausage, we formed patties and Vac-sealed all of the flavored stuff.

Grind together and either form into patties or stuff into casings.  Venison is too lean and dry to do on it’s own, but I suppose you could.  Venison is also kind of “gamey”, the pork also helps tame that.

I packaged my finished product with 1 lb of meat per package or 1 link, depending on the type.

*Tip on the spices.  Mix everything up and then cook a small patty to make sure the seasonings are to your liking.  Do this BEFORE you crank out the whole batch into links and patties. 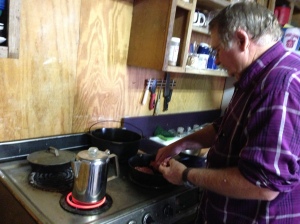 WW:  5 P+ per cooked quarter pound.  Will vary based on what fat content your pork has. 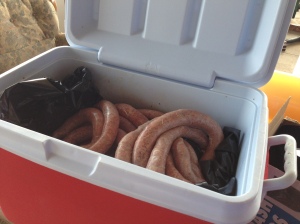 For whatever reason, I was thinking about brand snobs, brand/company loyalty, etc.  Here are some random facts about me and brand loyalty.

Funny how I’m so set in my ways when it comes to loyalty to certain brands, but with most things I don’t have the slightest care.    Dan however is a huge brand snob when it comes to everything and if I buy something that isn’t the right brand or the one he wants, I have to hide that fact!

The meat market manager at the little old HEB on my way home has the BEST specials that aren’t advertised.  He often gets random things that they don’t usually carry at that location and offers them at a great discount.

Every week he offers something at like 75% off.  About once a month it’s something I actually will or can eat and that I want! One of my favorites is Applegate Farms products.  I’ve tried their lunch meats, canadian bacon, turkey dogs, and now their all beef hot dogs.  Regularly $7.99.  I got them for $1.99.

Sometimes I buy a bunch of whatever he has, on the chance I will like it (and I usually don’t see the same thing again).  If I buy a bunch, I just freeze it all for quick meals.   This time I only bought 1 package of the hot dogs, as I am a hot dog snob.  I really should have bought a few more!

Chili-cheese dogs.  No pics, you know what they are.  Chili, dogs, buns, onions, etc.  Easy to fix and Dan likes it.  The chili was from a can, because I was too busy to make it, which I prefer if I can help it. 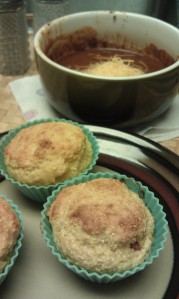 When I was a kid my mom loved putting cut up hotdogs on pizza, especially little mini ones that we got to make ourselves (is that weird?).  Recently I saw my BFF’s mom post about chili cheese-dog pizza, and that’s where I got this idea, minus the chili, because I had none left.  It was tasty, just like a loaded hot dog! 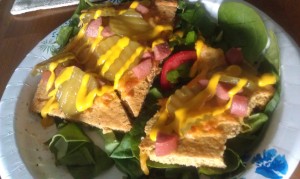 George’s Ocean Terrace in  La Jolla.  I’d been to George’s before for dinner (but it was dark).  One of the best views in LaJolla, their rooftop patio is amazing (although it was overcast the day we were there).  Not a whole lot of gluten-free options.  I opted for the 5 spiced chicken salad and made a gf dressing sub.  It was ok, I was hungry 2 hours later.  Dan’s mom and cousin got the fish tacos and loved them, as well as their soup.  Not sure about the other 10 people who were with us.   They had dessert too, which they were raving about.  Views and service were terrific.  Most of our party was really pleased with the food.  I liked mine, it just didn’t stick with me. 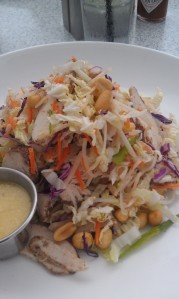 Spaghetti Factory in San Marcos.  Rehearsal dinner was here.  The spinach dip was good (I just took a bite on a fork to taste).  They do have a gluten-free menu, although I didn’t find it all that exciting.  I got the baked chicken with gluten-free pasta.  The chicken was ok, the pasta was undercooked (I think it was the Heartland brand) and they forgot to bring the marinara sauce out with the meal.    Dan got one of their meals that had a bunch of different Italian dishes, he wasn’t impressed either.  Eh, it’s a chain restaurant, it wasn’t horrible, but I wouldn’t make a special trip either.   By time we got back to the hotel, I was starving, so Dan took me to Sprouts to get more food!

Victor’s Kafe in San Bernardo.  Lunch on Friday by myself, I got takeout here after I dropped Dan off at the country club.  It was GREAT!  Yelp rarely lets me down.  I had the Greek Chicken salad, large size, no pita.  It was super tasty and cheap.  Plus the guy working the counter was really nice and fun to talk to.

Azul in La Jolla.  We had brunch here the morning after the wedding.  Nice view of the ocean (although it was overcast again).  Service and view were great, so was the food.  For starters, they bring out fresh fruit and pastries.  To eat I had the sausage and eggs with cajun potatoes (they had to make them gluten-free for me).

Dan and his mom had the croissant french toast.

A few other people at our end of the table had some awesome looking omelettes.  Everyone loved their food.

The Godfather.  Saw this one in a book at our hotel and decided I was taking Dan there as a surprise (he loves mobster and mafia stuff).

It’s in a weird location, but don’t let the exterior fool you!  This is a NICE restaurant   They bring you fried zucchini to start (I can’t eat it, Dan had a little and said it was good).  Then we had caprese for an appetizer (Dan LOVES it).  We each had a dinner salad before the main course. Dan got one of the stuffed veal dishes, I got one of the salmon dishes.  He had so much food, he took a box home to his parents (his came with pasta and 2 huge pieces of veal stuffed with prosciutto,  cheeses, etc).  My food was good, but his was even better.

LOVED it.  Food was good, atmosphere was wonderful, very dim, cozy, and romantic, and the service was stellar.  One of the best displays of customer service I’ve ever seen by all staff that we encountered.  In fact, the guy bussing the tables saw me make a face when I got my salad and rushed over.  He brought me a new salad without croutons (which is how I requested it),  Our glasses were never empty.