Read about my blog about my oldest running buddy HERE

I’ve been MIA, but that is going to change!  I am going to get back to my bloggin time 🙂  I may have been gone, but accomplishing much in the time I was away!  Really the only thing I can remember is some of my Cap2Coast random stories.

Is it possible to be super busy but at the same time, it be stress relieving and relaxing?

I’ve been going non-stop since last Saturday and I feel GREAT!

Sunday:  Long run with my friends at Hill Country Running.  Stayed up too late driving home from the wedding, but run was decent.  Then going away dinner with our friends Devon and Kristi (moving to DFW), then Olympic Party downtown with Austin Runner’s Club, Jack and Adam’s, and LUNA.  Drive to San Marcos.  Stayed up SUPER late with my good friend Alison catching up.

Wednesday:  Travel to Houston, ran with Bayou Country Road Runners, played in a fountain (not recommended if you have errands to run).  Set a record for most money ever spent on a salad and weight of salad.  Whatever it was good and healthy.

Thursday:  Early AM to the Houston office.  Out on a boat all day doing sampling in Galveston.  Fun but it made for a very long day and a very late lunch (thank goodness for snacks).  Some Zoe’s kitchen, Barnes and Noble, and then a very hot run with a group from Luke’s Locker.  Wish I wouldn’t have gotten dinner at the hotel, my crab and shrimp salad was really lacking 😦  I regret not getting something in the Luke’s Locker area before heading back to the hotel.

Friday:  Wow, is it Friday?  I got to sleep in today.  They don’t want me at the conference until noon to work our booth.  So instead I am working in my hotel room, in bed, drinking coffee, plotting my plan for hitting some tax-free weekend shopping before work today.  First stop is Athleta.  Only one in Texas and it’s in Houston.  Pro deal+tax free, heck yes!

*Hardest part is trying not to spend my vacation money on tax free clothes and shoes!

A coworker handed me a flyer last week about this event while we were out for lunch.  The Sunday, I received a message about this race on Facebook with a discount.

Monday I finally got around to reading about the specifics.  Race in Williamson County to benefit brain tumor research.  September 9, 2012.

I signed up and formed a team.  The team is NOT in my name, I put it under LUNA.  You can join the team here.  Some of my friends and family have joined the team already.  I encourage everyone to consider joining the team.

I do not and did not ever have brain cancer.  I did go to the MD Anderson Center in Houston for evaluation of my tumor.  If you haven’t kept up with my blog updates, Dr.’s have chosen to leave it alone and monitor it with additional tests in June and September for now.  They don’t deny it’s there, but they are uncertain it needs to be removed at this point.

I want to do this event to help others and raise awareness.  Just with my limited experience with the subject matter, I understand the need for more research and exposure for the problem.

More about the beneficiary:

Brain Power 5K is proud to join the Dr. Marnie Rose Foundation, a 501(c)3 non-profit organization, in their efforts to eradicate brain cancer.

The Brain Power 5K seeks to provide funding to the Dr. Marnie Rose Foundation for brain cancer research at the University of Texas MD Anderson Cancer Center as well as pediatric initiatives at Children’s Memorial Hermann Hospital. We wish to create an opportunity for Central Texas to honor those affected by brain tumors.

My long-time running buddy ran her first Boston Marathon while I was on vacation.  It wasn’t the race she’d dreamed of and trained for, but I am still super proud of her!

Read about her race here

Megan:  You should do it too.

Me:  No more marathons.

Megan:  Run the half then.

Geez, my arm is easily twisted.  So i’m registered for the half, will cheer her on for the full the next day.  Trying to talk a few more girls from our circle into going.  Plus my college roommate lives down there, she wanted to do Princess a few years ago, trying to get her to do this one instead.  Not to mention all of my new Orlando friends I met at the LUNA Summit a few weeks ago.

Funny thing, i’ve never  been or had the desire to go to Disneyland or Disney World.  I guess I am weird.

I’m sure it’ll be fun, after all, it’s the Happiest Place on Earth!

This past weekend was one of my “give back events.”  What the Austin Marathon means to me is volunteering.  I volunteer every year and i’ve never run the event.  I love being involved on the volunteering side, just like for Decker Half Marathon.

The slogan may have been eat, run, sleep, repeat.  But this weekend was volunteer, volunteer, volunteer.  I went downtown on Friday and stayed until late Saturday.  I had a great time and loved it, but man, not used to standing so much.  I felt like i’d run a marathon after the first 2 days of standing for 12 hour days.

This was the first year I’ve done packet pick-up which was incredibly fun and fast paced (so much so, that I never even got to look at the expo, which I heard was awesome).  Plus I was a team lead, which was super cool, thanks Megan! (here she is assigning our first crew).

My job for the weekend 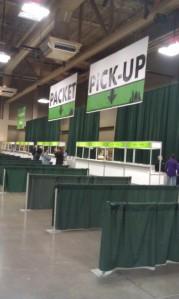 The masses in for their packets.  Friday was pretty steady, Saturday was SLAMMED! I was one of 2 team leads for the half marathon pick-up. 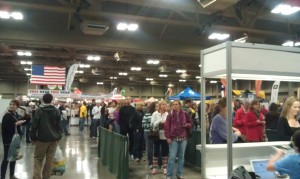 I was more than exhausted after the weekend, but well worth it!  Now on to Waco for work for most of the week!

This race is special to me, because it was my first half 6 years ago.  I’ve done it every year since with the exception of 1 and I really regret the year I skipped.  Not sure why I like it so much, it’s just a good local race that is always fun.

Course:  New course this year since Waterloo Park is under construction and that was formerly the finish.   The course was good.  Same start, different middle, same end until the last half mile, turned twice and finished in front of the Texas State History museum with a nice view of the state capitol.

The map looks flat, but there were some rises, including a really long one in the middle of the race.  There was a slight hill in the last .3, which people were verbally cursing.

I ran my sister and my mom both up that “hill” before they turned to run the last .1 and hit the chutes.

My mom was really stuggling.  She gave me a scare, I really thought she could possibly collapse.  She said her hip was giving her trouble but kept pushing on her chest.  And at one point she latched on to me to keep herself upright. ACK!  Scary.  I made her walk a little bit to regain her balance.

I knew she was fine after she finished, because she stood in line for a finish line photo, lol.

Crowd/music/cheering:  Was spotty, but that’s how it always is.  The only really empty areas were the first 3 miles, which I barely even noticed.  Not as much music as years past, but I wonder if that’s because people weren’t aware it was a new course this year?

Aid:  Water and Gatorade was fine.  Although Megan and I (we ran together from 6-9) arrived at mile 8 and they seemed to be short of volunteers and didn’t have enough people.  Not a big deal, I got my water, but later in the race, may have been an issue.

Swag:  Their packet is the best around.  Who doesn’t want a bag of useful 3M brand products?  I really love seeing what is new from them every year, they are a really innovative company and always have the neatest products and ideas.

My most coveted items?  Post-its and bandaids.  You can never have enough of either!  Also included were glue, knee brace, lots of scotch tape, sandpaper, giant lint roller, glue, post-it flags all in a re-usable cinch bag.

Like the color of the shirt but not really a fan of the design (it says “fast, easy, fun”), although now it’s an inside joke amongst our friends.  The key to getting the best loot is getting there early.  All of the bags vary with what products they get.  Mom’s was only slightly different from mine.

They had a semi-expo this year, which was lame.  I just picked up my packet and left.

Facilities:  Port-a-potties were plentiful.  Bag check was quick and easy on both ends.

Refreshment:  I got my banana which made me a happy girl.  They have really good post-race food, just stuff I can’t eat due to the gluten:  breakfast tacos, Tiff’s Treats fresh cookies, etc.

Found AK after the race.  Never saw her on course, probably because she ran like a 1:36.

Once all of the troops were in, we moved back up North to the start of the race to get our cars and our brunch on at NXNW Brewery. 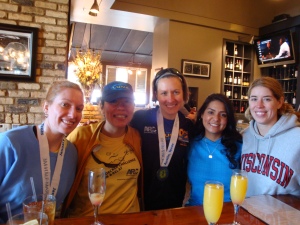 I’m weird, I’m just am never really hungry after the race (usually catches up with me that night or the next day).  I make myself eat though.

Who eats shrimp cocktail for brunch?  Weird people like me I guess.  Some of the biggest shrimp I’ve seen.  I also ate majority of the fruit off of Dan’s brunch plate. (he didn’t come to the race, but joined us for food). 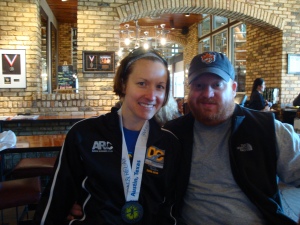 It was a perfect morning.

Perfect weather, wonderful race, and PRs all around. Everyone at brunch PR’d at the race.  My mom and sister had HUGE PRs.  I had a pretty big PR, one that will stay around for a while.  I don’t know that i’ll do any more halves in the near future, may be refocusing my priorities.

Half marathon with my mom and sister….take two.

Hopefully better weather conditions than Dallas Whiterock a few weeks ago.   Although the last 2 years haven’t been favorable.  Last year was unseasonably warm and humid with muggy drizzle.  Two years ago was the high winds that kept delaying the race because all of the barricades were blowing over.

I am surprised my sister wanted to do another, I am thinking my mom conned her into it 😉  1 month from tomorrow!

Like faster than Jimmy John’s freaky fast sandwich delivery.  And it was HOT.

Here is a little bit about Saturday’s race winner.

Amazing, I doubt I can even run 1 mile at his pace. I couldn’t help but smile….even when he lapped me, lol.

Ok so now you know I didn’t win 😉  It was a victory for me in many ways.  I made it through my last 20 miler (ok, it was more than that), I felt the best i’ve ever felt in that distance, and I feel GREAT afterwards.  Tiny bit stiff Saturday, barely sore yesterday or today.

Now to focus on recovery.  I know my body is still not well, but this gives me great hope.  If I can keep feeling well and staying in 1 piece.  There have been days where I couldn’t even function properly and then to have 2 great running experiences in a row?  Yeah, I’m all smiles right now.