DOR on Friday, like usual 🙂  I needed it.  My workouts have been terrible.  The only thing I can think of is work stress and the fact that i’d added gluten back in to my diet.  I am going to limit it as much as possible, but I have to eat it if i’m going to be tested for it (hopefully sooner than later).  My new Dr appt isn’t until May 18 and they said no tests that day.  Darn.

I had planned on leaving work early, but I had too much to do.  Plus, not only am I on call for myself (as usual till June), my boss took a long weekend vacation, so I am on call for her too.  I was supposed to take the Blackberry from a coworker before I left, but the dang thing kept going off with emergencies all day long.  So, yes, I stayed at work, got more done, and avoided taking possession of the Blackberry until I had to.  I’m glad I stayed, not just for my peace of mind, but I got quiet time to work on important items.

Came home, relaxed, then made dinner.  Although I already know how many P+ it is, I scanned my HEB Cajun Andouille Chicken Sausage because it’s fun (and I wanted to show it off).  Still trying to get used to my new phone, it’s a huge adjustment from a Blackberry. 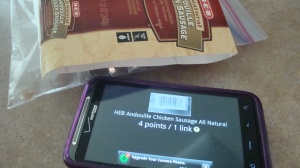 I LOVE HEB’s chicken sausages, I can only find them at HEB plus, which isn’t a big deal, there is one very close to our house, I just don’t go there often, because it’s not on the way home from work or the gym.

The chicken sausage was the main attraction at pizza night!  Red sauce, garlic, spinach, cheese, red peppers, onions.  Mushrooms on mine, olives on his. Mama Mary’s thin crust is easy and fab.  Once the ones I have are gone, i’ll only be buying them for Dan and finding myself a sub.

Randomness….I always put Dan’s food, if it’s special, on the right side of the dish.  Mine goes on the left.  This is because I am left-handed and Dan is right-handed (and I remember whose food is whose that way). 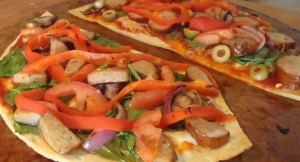 Very tasty.  (yeah, I may have cut a small slice off before I took the photo, lol!).  I was hungry and ate my half and some veggies.  Dan left a piece of his.  No, I didn’t eat it…but I thought about it.

Dan had to take off to have massage therapy on his neck.   I went and soaked in my lovely epsom bath, read a magazine, and turned in early.

2 thoughts on “Forget about it Friday”